In mid-December 2021, a team traveled to Houston Baptist University, where the Dunham Bible Museum has an extensive collection of early printed Greek New Testaments. (Look for news and image uploads soon.) Then, in January, Dr. Wallace led a small team with our new equipment to the Museum of the Bible in Washington, D.C. to digitize five New Testament documents: 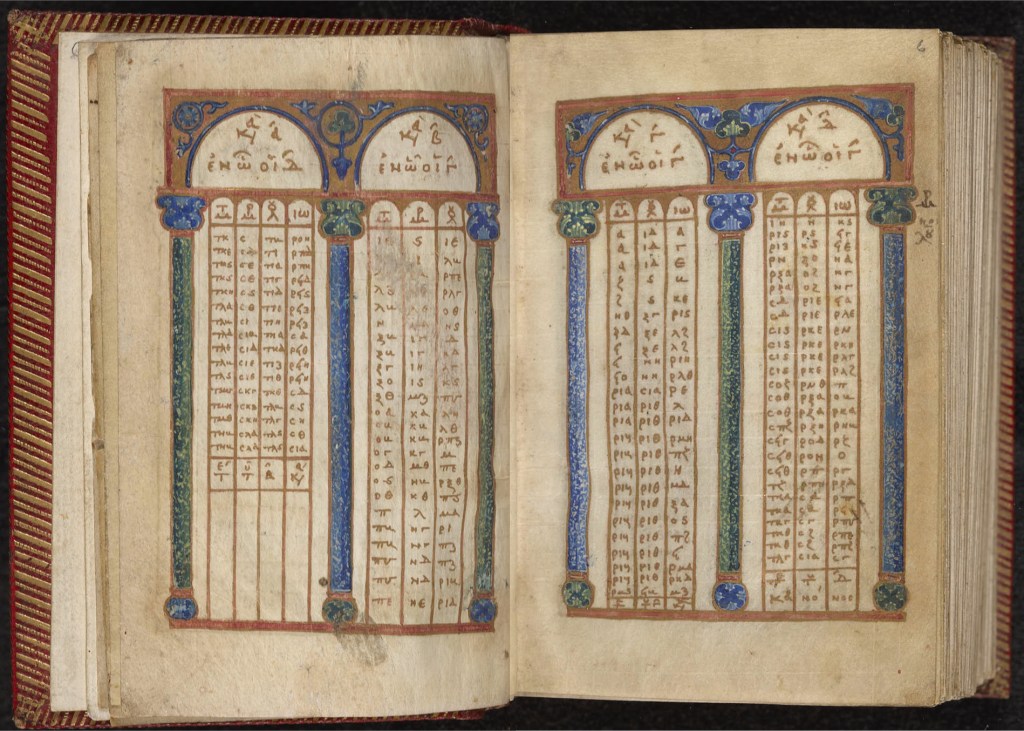 This little two-volume copy of the Gospels was written in a careful minuscule hand, probably for private devotional use rather than liturgical settings. The manuscript contains fourteen full-page illuminated canon tables, a concordance system for parallel passages (see this blog post for more information),  and later commentary in a less formal hand. These manuscript volumes are called “The Ussher Gospels” because they once belonged to Archbishop James Ussher, best known for his chronology published in the 17th century. 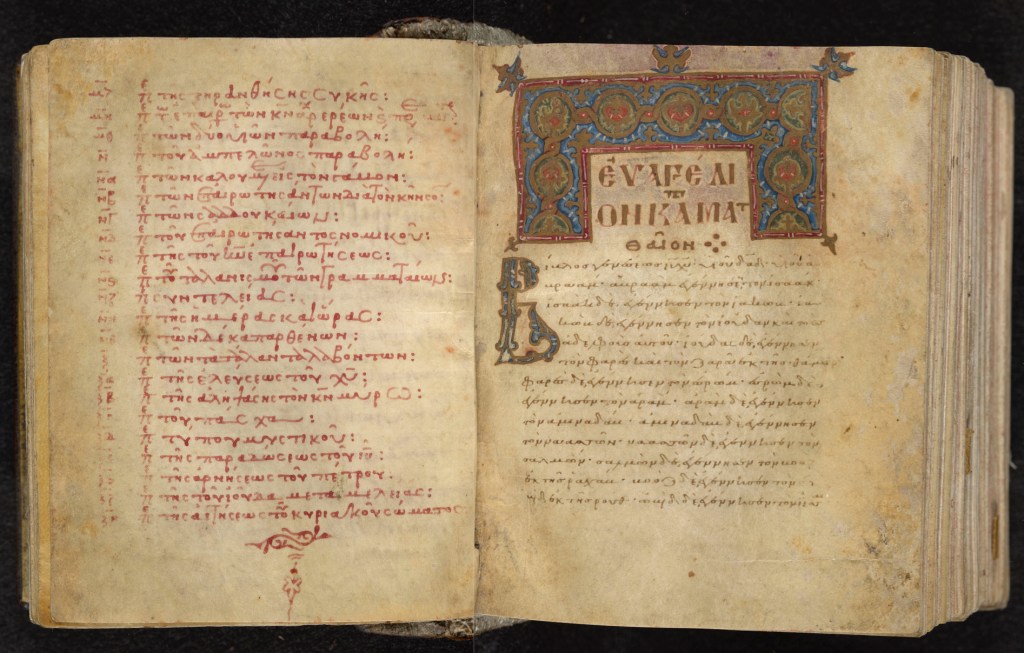 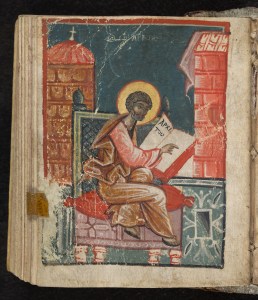 The “Evanis Gospels” manuscript (AD 1050–1100) was likely made at the Great Lavra of St. Sabas, a monastery overlooking the Kidron Valley in the West Bank, east of Bethlehem.

It contains all four Gospels written in a minuscule writing style called “Perlschrift” (or “pearl script.”) The scribe included canon tables at the beginning of the book and wrote chapter headings called “kephalaia” in red ink at the beginning of each Gospel. He also wrote section headings in red ink at the top of some pages. Unfortunately, at some point in its history, several of these were cut off when the pages were trimmed for rebinding. Mark and John include Gospel author portraits preceding the text of each author’s book. The manuscript is incomplete, however, ending in the middle of John 17:22. 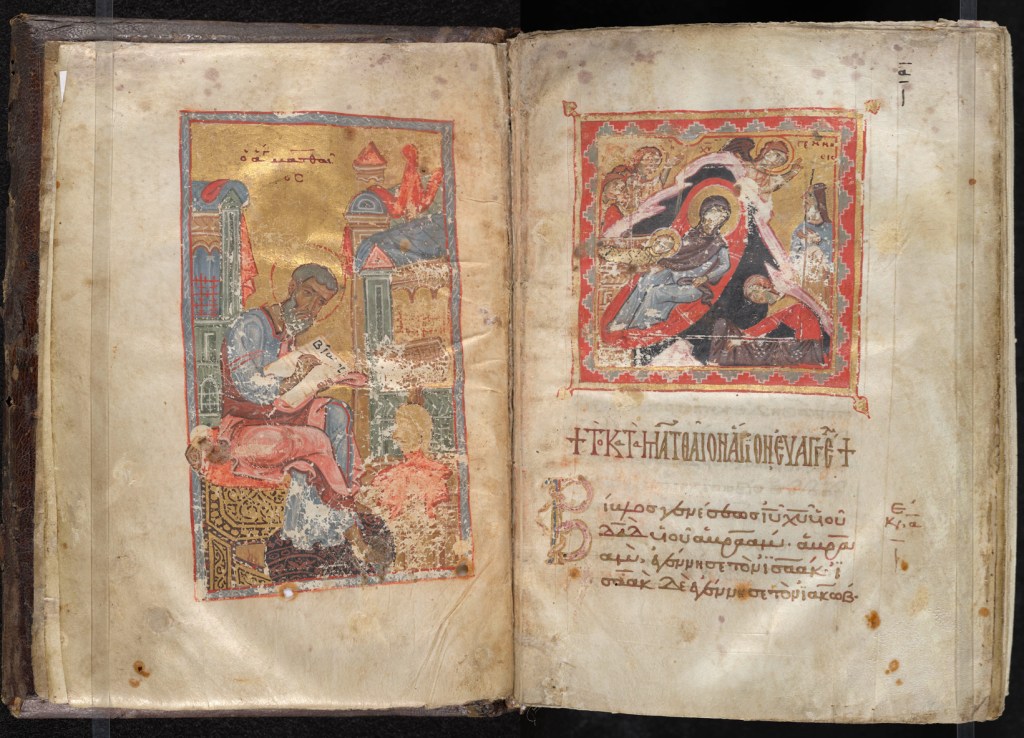 This beautiful manuscript dates to AD 1156. We know this because the unusually long colophon—more than two pages—is signed and dated by the scribe, Manuel Boukellaros Hagiostephanites. The volume was created for John the Cretan, archbishop of Cyprus from 1152–77.

Each Gospel begins with an ornate, gilded icon on the back of the page facing the text and an iconic heading to begin the Gospel (see the image above). During the examination phase of the expedition, Dr. Wallace started calling this unusual feature “dueling icons.” The icons preceding each Gospel book picture the author, as often found in illuminated manuscripts. The headers on the facing page include a scene from the narrative in the text: Matthew has an image of Jesus’s birth, Mark Jesus at his baptism, Luke a pregnant Elizabeth, and John Jesus at his resurrection. As far as we know, this is the first time the entire manuscript has been digitized. We look forward to sharing this unseen treasure with the world.

Lectionary 2383 is a 15th or 16th century document bound together with GA 1361 to form one volume. Eleven paper leaves follow the 686 parchment leaves of GA 1361. The hand is neat and uniform. 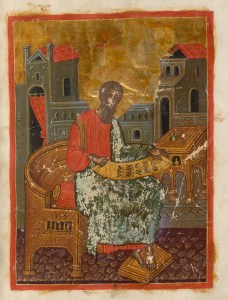 While the majority of the leaves are parchment, a handful of folios are paper dating from the 14th century. The paper leaves likely served as replacements for damaged parchment leaves when the book was rebound, perhaps gaining its ornamental cover then.

Most lectionaries were intended for liturgical settings, and, thus, often include artwork, ornamentations, and helpful visual markers.  Lectionary 2404 is no exception. Throughout the book, “rubricated ektheses” help readers quickly find the right place to start reading the assigned passage for each date (see this blog post for more about ektheses). “Rubricated” means that certain text uses red ink. An “ekthesis” is a “visual marker where the first sentence of a new paragraph or [reading unit] extends out into the left margin.” Additionally, the “incipits” (the opening words of a paragraph or reading unit) use large, gold lettering—a beautiful, eye-catching touch

This is another document that has never been photographed in full. Soon, the world will have complete access to this beautiful lectionary!

Dr. Wallace and the staff of CSNTM wish to thank Dr. Daniel Stevens and our gracious hosts at the Museum of the Bible for their hospitality and, most of all, their trust. Handling these precious, priceless manuscripts can be nerve-wracking, but these professionals understand the immense value of digital preservation. Now, these five New Testament documents can be safely and securely protected from further damage while allowing researchers the opportunity to examine and study them digitally as much as they like.