As the printing press was being developed and used by Gutenberg in the middle of the 15th century, a New Testament manuscript was produced by a scribe named Emmanuel from Constantinople. The Leicester Codex (GA 69) is a treasure trove of historical uniqueness for what it contains—and what it does not contain. The manuscript contains most of the New Testament, with parts of Matthew, Revelation, and Jude as lacunae.

One interesting quirk appears on folio 173v. The scribe of the manuscript completely omits a large portion of Acts. From Acts 10:45 to 14:17, the scribe simply skips text. While copying the exemplar, the scribe did not notice anything was different. The original hand keeps writing as if nothing happened. A later hand, however, makes a note that a portion of the text is missing.

The scribe uses a thick reed dipped in ink to write out the text. One can see from the images that the omission does not occur when the scribe paused to dip his ink, but in the middle of a unit before the ink needed a recharge. This makes the omission even more perplexing, since one might have guessed that the scribe accidentally omitted the text while dipping the reed in ink. Whether the scribe or the exemplar, then, are first responsible for the omission is unclear. And, unfortunately, the exemplar is not extant. The Leicester Codex significantly agrees with five manuscripts in Acts: 2492 (72.57%), 547 (72.07%), 1245 (71.27%), 618 (70.84%), and 1828 (70.69%). I calculated these percentages with the data from the CNTTS’s NT Critical Apparatus at all the S (Significant) units that deviate away from the NA28 text. These five manuscripts, however, contain 10:45 through 14:17—the omitted text from the Leicester Codex. Maybe one day, someone will discover another manuscript with GA 69’s specific omission which could give clues as to whether the scribe Emmanuel or his exemplar first excluded this text in Acts.

CSNTM’s images of the Leicester Codex have been an essential tool for me during these past three years, allowing me to do primary source research. In August of 2021, I was lucky enough to visit Leicester to examine the manuscript in person. After three years’ research and study of its images, I had compiled many questions that only a physical examination could answer. Two in particular loomed in my mind. First, J. Rendell Harris posited that four watermarks could be seen throughout the manuscript; I wanted to see if this was accurate. Second, I wanted to physically inspect the quire configuration.

Regarding the first, I was unsuccessful in locating the watermarks among the paper folios: it appears that they have faded over time. What J. R. Harris saw is no longer visible to the naked eye. For the quire configuration, however, the scribe of the manuscript employed a standard scheme for the entire manuscript and only deviated a few times from that scheme. First, a parchment folio would be used followed by three sheets of paper in the middle concluded with a final sheet of parchment. Then, the folios would be folded in half to create the following arrangement: parchment, paper, paper, paper, parchment, parchment, paper, paper, paper, parchment. The scribe would generally number only the first half of the quire—that is, a “quinion.” Thus, the very first folio of the quire would list the number of the quire, i.e., κα (61r), then the following paper and parchment folios would list the specific folio within the quire, i.e., φυλλον β του κα. On the second half of the quire, the scribe would not number the folios.

The curious part of this configuration is that from folios 61 to 65, the manuscript contains text from Luke 17 to 21. Then, as the Biblical text moves into Romans, the quire numbering jumps backwards from kappa (κ) to alpha (α).

Thus—though the current binding holds the Gospels, Paulines, Acts, Catholic Letters, then Revelation—the Pauline letters appear to have originally been placed at the front of the codex by the scribe, followed by Acts, the Catholic Letters, Revelation, then the Gospels. This begs many questions that are currently left unanswered.

The Leicester Codex holds a treasure trove of questions that await answers. My dissertation will attempt to look at the textual relationships of the manuscript with other manuscripts across every book of the New Testament. The manuscript is a document that stands at the end of a vast manuscript tradition of the Greek New Testament, yet it contains a text—due to its similarity to Family 13 manuscripts—that scholars have considered more interesting than the standard Byzantine text.[1] CSNTM’s images will allow me to continue this interesting work on the Leicester Codex as I continue my studies remotely. 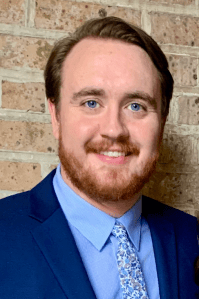 Matthew Burks is a PhD candidate at New Orleans Baptist Theological Seminary with plans to finish this coming May. He also works in the Center for New Testament Textual Studies under the direction of Dr. William Warren. Matt has been married to Alisha since 2014 and they now have three children under the age of 5.